Celebrating women’s wisdom and spirituality as a Hedgewitch, Bean Gealach, shamanic practitioner, writer, teacher, mentor, coach, artist, healer, advanced PSYCH-K® and certified Moon Mná Women's Celtic Circle Facilitator and, yes, a Badass Crone! I travel with you on this journey, holding the light for you. 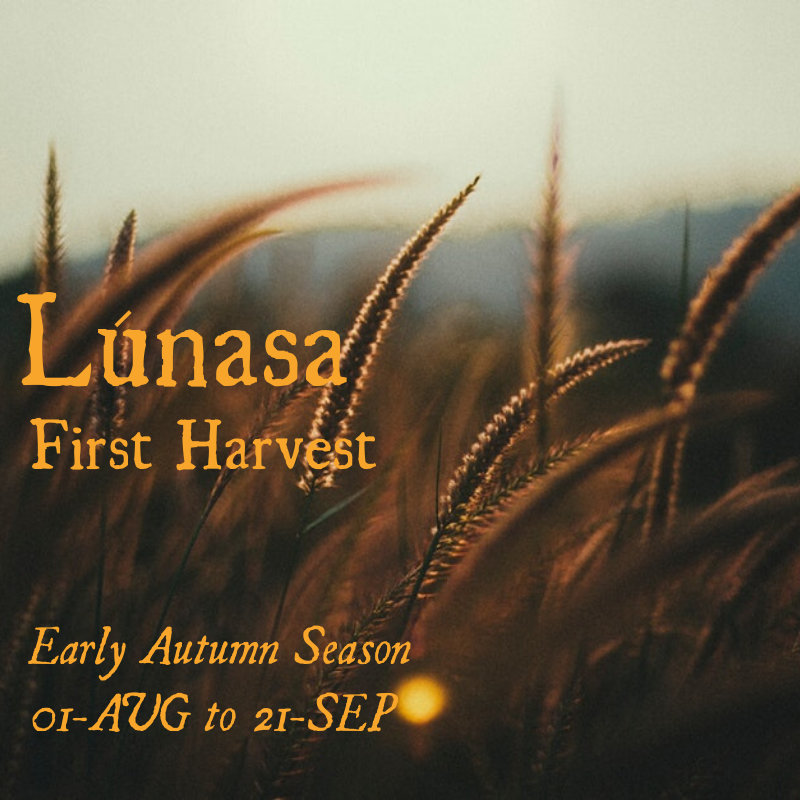 Join us to celebrate Lúnasa Season

Explore the season from Lúnasa (also known as First Harvest, Lammas and Lughnasadh ) through to the Autumn Equinox on September 22nd: celebrations and soul work to honour the abundance of the first harvest, our connection to the Land, and the shift from the Fire energies of Summer toward the Water energies of Autumn.

We will use the framework of the Celtic cosmology of Land, Sea and Sky — which exists in both the physical and spiritual realms — to explore the celebrations of Lúnasa  including traditions, practices, history, lore, deities such as Lugh, animal allies such as Crane (associated with Lugh), rituals, divination,  goddesses in other traditions such as Diana aka Artemis. We will also look at other Sky traditions, such as the Lion's Gate 8:8 Portal on August 8th.

Land (Talam), Middle World: Land holds the magic of our physical world and its energetic counterpart, our Self and all those who inhabit the Earth such as plants, trees herbs and crystals, animals of all kinds.  In Land, we can also look to grounding meditations, along with crafts, rituals  and practices associated with the deities of the physical land such as Brighid or An Cailleach.

Sea (Muir), Under World: Sea is our magical connections with the Sídhe (the Faerie realms) and others who reside in this realm including ancestors and other spirits. It is a place for journeys (aka imramma), rituals, exploring deities associated with water and the underword (such as Yemaya, Boann and others), and animal allies associated with the Sea realm such as Selkies, whales, seals, etc.

Sky (Nem), Upper World: Sky holds the medicine of the Sun, Moon and Stars; lunar/solar events, divination, sacred crafts of Air (such as incense and candles); history, practices and rituals associate with various deity pantheons, animal allies of the Sky realm such as birds and insects, and our connection to Spirit.

In our last course, we introduced a new feature: Resources for your practice, introducing (or refreshing) concepts and activities that may be new to you, and which you can add to your personal Book of Shadows. These resources will tend to be core concepts, and not specific to any celebration in the Wheel of the Year, but ones  we will use in one or more of the lessons in this course.  Many of these introductory concepts will eventually be the basis of more in-depth courses and workshops.

In this course, we explore our animal spiritual/energetic allies, journey to meet a new or existing ally and create relationship with them.

Initial course content will be available on July 25th, with additional lessons and activities  “dripped” in August.